Ten years in fashion and a strong interest in plants and gardening lead Marie to naturally turn to perfumery. Trained in Italy, she is passionate about natural perfumery and particularly for the aromatic ingredients that are native to her country: South Africa.

Back in Johannesburg, she has created Saint d’Ici, a collection of natural perfumes exclusively produced in limited editions, without the fear of upsetting the traditional way of operating in the fragrance industry. She decided to only work with independent perfumers located all around the world, and to source her ingredients directly from small African producers ensuring the ability to promote fair trade and to minimize their impact on the environment.

This month, Marie unveils the very first collection of Saint d’Ici via a crowdfunding campaign on Indiegogo. A way to start the production, while offering her products on pre-order to enthusiasts around the world. Meet a daring and deeply passionate woman.

What was your first olfactory memory?

My first olfactory memory is very close to the home of French perfumery. My grandparents lived in Saint Jeannet, a small town in the South of France not far from Grasse, and I spent a good part of my early childhood there. I particularly remember my grandmother’s rosemary hedge. I thought it was the most fabulous thing that I was allowed to pick the leaves and eat them at my leisure. My grandmother would also take me with her to harvest lavender that was (as far as I can recall) growing wild close to their house. She stuffed the lavender into small drawstring bags for our wardrobes. I still have it amongst my clothes. I’m not sure whether it’s been refreshed without my knowing but it still smells of lavender!

How did you come up with the idea to launch Saint d’Ici?

It was an organic process so it’s hard to pinpoint an exact moment. A good friend of mine works as a perfumer for a large perfume house and, through her, I became increasingly interested in perfumes. At the same time, I was becoming increasingly disillusioned with the fashion industry that I had been working in for ten odd years. My escape at the time was gardening and I was seriously considering a dramatic career move in this direction. I decided to study the idea further and enrolled in a Masters of Commerce. At some point I realised that both of my worlds meet in natural perfumery. I read voraciously, trained with AbdesSalaam Attar of La Via del Profumo in Italy, and slowly worked my way through the different stages of understanding natural perfumery. Being an outsider has its advantages. I hadn’t been shaped by an industry into believing that things need to be a certain way. The personality of Saint d’Ici is the result of a lot of “but why not?” questions. I’m increasingly realising that what we stand for on the whole is somewhat unorthodox in the perfume industry. I think that’s a good thing.

What is the story behind the name?

It’s directly related to my olfactory education. I grew up on classic scents: my grandmother has always worn Ma Griffe, my mother Chanel no. 19, my father wore perfumes dominated by black pepper and one of my first perfumes at the tender age of 11 was 4711 Original Eau de Cologne (believe it or not, but I really loved it!). When I started blending I was still gravitating towards classic ingredients. Gradually, as I sourced more ingredients from southern Africa, I came across another world of scents: rich, dusty, sweet-herbaceous, animalic, deep smells. I was finally able to match my experiences of the two worlds that I grew up in. It wasn’t Saint Jeannet anymore, but Saint d’Ici (of here in French).

Describe your brand in 3 words

Let nature be your teacher (I tried but I need 5!)

Why are Saint d’Ici perfumes so unique?

We focus is on the ingredients themselves; they are the inspiration all the way. The rest just leads from this.

My husband runs a project with urban farmers in Soweto, so I suppose that supporting small-to-medium-scale farmers is something that is close to my heart. Farming for the extraction of perfume ingredients is such a good opportunity for farmers that so desperately need high-value crops to compete. At the same time, people are increasingly wanting to know what the impact of their purchasing decisions are. We’ve coined the term farmer-to-fragrance to reflect this philosophy. Showing where and how the ingredients that we use are grown. Supporting small-scale farmers, socially-minded projects and environmentally sound businesses, wherever possible. There are difficulties with working in this way. Firstly, it means that the quality of the oils must be checked in-house. Luckily, thus far, a lot of these smaller projects have delivered top-quality ingredients. The second difficulty is that, since Saint d’Ici doesn’t purchase their ingredients from large fragrance suppliers who work hard at standardising their product, the variability of the ingredients from one season to the next is far greater.

After mulling over this second difficulty for a while together with the perfumers that I work with, we decided that this was in fact an opportunity. Why try to control the elements? Good winemakers don’t try to standardise the outcome. They consider the personality of the harvest that year and do their best to create a blend that will celebrate it. Subscribing to the same philosophy, we offer only limited edition perfumes. I am not referring to small-batch production here but true limited editions – 50 or 300 or 500 bottles of a particular blend. In this way, our blends also have a year and terroir, a time and a place. The other advantage to limited edition runs is that, as perfumers, we have far more creative freedom. We don’t need to try to standardise our offering for a broad majority. The more daring blends simply have smaller runs. What we’ve ended up with is an open and continuous creative process.

This brings me to my final point about Saint d’Ici: we work with various perfumers. Most of these perfumers are self-taught, but incredibly talented natural perfumers. In this way, different voices and different creative styles are being brought in. I send the perfumers ingredients to work with and these form the basis of the inspiration for blends.

Our botanical riches have been used by indigenous southern Africans since the dawn of humankind. The tip of Africa has the third highest level of biodiversity in the world. Although South Africa represents less than one per cent of the world’s land surface, it accounts for 10 per cent of known flowering plants.

What are your favorite raw materials?

Rose Leaf Concrete: I have a 1960s copy of Arctander where he wonders at the relative lack of interest in Rose Leaf Absolute. Strangely, it still seems relatively rare today. We source ours locally in South Africa. We are still struggling to develop a good quality absolute from the concrete. However, it is our favourite ingredient in solid perfumes. It sits so well alongside Persian Rose to create a beautiful unisex, green, slightly spiced rose.

Namibian Myrrh (Omumbiri): the Himba women in Namibia have always collected the resin from the Commiphora wildii tree for perfume. Not only is it a beautiful scent in its own right but it also seems to blend well with virtually anything, adding a depth to blends without drawing too much attention.

Ouhout (Leucosidea sericea): Directly translated in Afrikaans as ‘old wood’, the name apparently comes from the fact that, although it’s a small evergreen tree, its wood burns slowly and creates a lot of smoke similar to that of old decaying wood. The same is true of its scent: deep and ancient, like opening an old, weathered, wooden chest. It’s also a favourite with the other Saint d’Ici perfumers.

Where does your inspiration come from?

It all starts with an ingredient. Understanding its personality, its light side, its dark side. Next I find some friends for it – those ingredients it will blend well with. Then I think about the different, less obvious, directions it might go in. I’ll typically try two to three different directions and choose the best. Salaam taught me to make perfumes quickly, with few main ingredients and to stay true to the brief that you’ve set for yourself. I don’t agonise over blends. If it’s not right it’s better to start again.

How would you define the olfactive identity of South Africa?

If I have to think of one specific scent, it’s the lingering smell of smoke from wood fires of the night before. Most South Africans like nothing better than to cook their food on an open flame. Many also still use open fires to warm themselves in winter. Traditional homes absorb the smoke and it permeates both their inhabitants and their things. Even city-dwellers reconnect with the bush by sitting in front of an open fire. It’s ancestral but it’s also still so present.

The other scent that initially hit me when I moved to rural South Africa from Belgium was the dustiness. It’s even present in the city I live in: Johannesburg. In winter the dry wind picks the dust up from the outskirts of the city and in summer its scent hits us hard as soon as the first raindrops come down from the highveld storms.

What do you think make South African scents so unique?

Perfume arguably originates in southern Africa. The oldest humans on earth, the San, derive their name from the aromatic plants that they rubbed over their bodies together with fats. According to van Wyk and Gericke who wrote a book titled People’s Plants, San, Son or Sab was the original Khoi name for Nama Buchu. The full name for the San was Sonqua, Sanqua or Tanqua, with the ‘qua’ suffix referring to ‘me’ or ‘people’. The San were therefore called ‘the people or men who use aromatic bushes to anoint their bodies’.

Our botanical riches have been used by indigenous southern Africans since the dawn of humankind. The tip of Africa has the third highest level of biodiversity in the world. Although South Africa represents less than one per cent of the world’s land surface, it accounts for 10 per cent of known flowering plants. In fact, southern African plants have been exported around the world and are now staples in many gardens globally. These include agapanthus, plumbago, arum lillies, gladioli and freesias.

Another southern African native to have travelled abroad is the Rose Geranium, Pelargonium graveolens. Its potential as a substitute for rose oil was immediately recognised by European settlers and it was brought back to Europe where it was selectively bred to maximise its rosiness. The French grew it on a large scale in the Reunion Islands, where it came to be known as Bourbon Rose Geranium. South African rose geranium growers have imported this variety back to South Africa and we are now one of the largest producers globally of Rose Geranium oil.

So this is what makes South African perfume unique: it’s a return to source, an opportunity to celebrate our incredible biodiversity through scent and all this within the framework of modern natural perfumery and its extraction methods. It’s perfume that’s come full circle.

A warm thank you to Marie Aoun for this exclusive interview before launch. Click here to discover Saint d’Ici perfumes range and support this wonderful project! 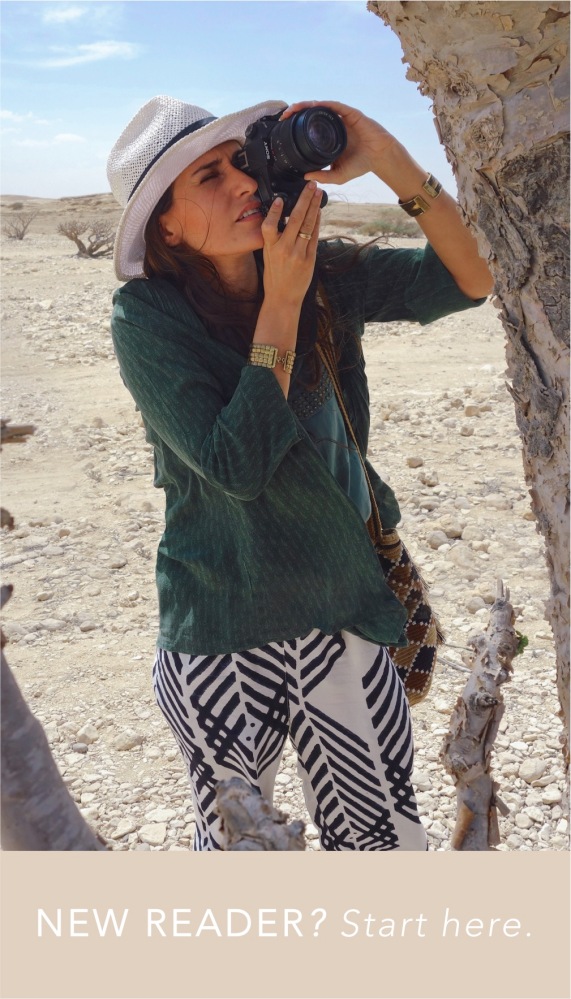 This blog is for all perfume enthusiasts but especially of travel and discovery. Because scent is also a gateway to the people and cultures of the world, I invite you to travel your nose leading the way to discover the world differently.