Popular small island in the Indonesian archipelago, Bali abounds with a variety of flowers and large plants. The Balinese place a unique emphasis on flowers and perfumes, which punctuate their lives. But the scent that is probably the most cherished among the Balinese is ‘Sandat’, which is more commonly known as ylang ylang. Ylang ylang is a flagship ingredient in perfumes due to its sweet and exotic scent. At the beginning of October, I arrived in Bali to discover more about this small fragrant flower.

The ylang ylang (Cananga odorata) is a tree from the Annonaceae family and is native to Southeast Asia. Although within Balinese culture these trees are often maintained at a height of 2-3 meters, they can reach 30 meters in their natural habitat. The flowers, shaped like disheveled stars, start out a soft greenish color before maturing to a bright yellow. The trees blossom year round but most abundantly during warm and humid seasons.

The monsoon season had just begun, so I ventured with my suitcase to Ubud, the bustling center and cultural hub of the island. Upon my arrival, I wasn’t disappointed; there were flowers of all varieties everywhere; mingling together and coloring the landscape. I realized that ylang-ylang trees adorn every garden and I saw the penetrating and slightly spicy scent of their flowers at every junction.

From the moment I arrived my focus was on small baskets made from palm leaves that had been deposited on the ground. Inside the baskets lie a harmony of colorful flowers including the famous ylang ylang. These are Canang Sari offerings, which are traditionally placed on the street every day by each family. These delicate offerings adorn the streets and it became a persistent challenge to avoid trampling on them. Deposited on the ground in front of houses and altars to honor the gods and ward off evil spirits, you can sometimes see them stacked up in their hundreds in front of temples or sacred trees.

Every morning, I observed the ritual of Balinese women filing these little baskets with flowers and food, watched them light an incense stick and then sprinkle the contents with a few drops of holy water; all of which would be repeated several times a day, and then the next day and the next…

Ylang ylang is one of the flowers used to decorate the offerings. This has become the most common usage of this type of flower by the Balinese. The small pale flower blends well with yellow frangipanis, orange marigolds or violet bougainvillea. Although its color is discreet, its scent is often the most pronounced.

If you do happen to crush a Canang Sari underfoot, do not attempt to fix it because it is actually only the act of creating the offering that is important. What happens once it has been placed does not matter, and it will be replaced later anyway. Although do try to avoid them and be as respectful as possible. Carried by the wind, these ephemeral creations are often found piled up in gutters among household waste. They are eventually incinerated. The smokey smell from burning Canang Sari is almost persistently on the air in Bali, and mixes pleasantly with the aroma of newly blossomed fresh flowers.

When the sun reaches its zenith, I went out to roam the nearby markets. It was here that I truly realized the importance of flowers in the life of the Balinese. Balinese women spend more than half of their lives making offerings and from the age of six, the flowers are the main element of their creations. They really are a daily requirement. I meet Made, who sells flowers grown in her garden as well as Canang Sari, which she makes before my eyes. I cannot describe the grace and dexterity that she exhibits in her craftsmanship. I am attracted by the basket of ylang ylang facing her, she tells me that she cuts the flowers between dawn and 7 a.m. so that they retain their subtle fragrance. She has many trees around her house and each produces an average of 5 kilograms of flowers per year.

Ylang ylang means in Indonesian the ‘flower of flowers’ because it represents the flower of life. Its sensual and voluptuous scent historically symbolizes love and marriage and is associated with many Indonesian rituals including the most important of the loving union. The fragrant yellow flowers traditionally adorn the hair of the bride and are scattered over the nuptial bed.

Later, at the hotel where I stayed, I met with Dewa, a Balinese man who in his spare time provides tours of the island. His fine face is eerily reminiscent of those of Central Asia. His mouth forms a radiant smile. I express my interest in sandat. He seems surprised but delighted at the same time by my passion for this important flower in Balinese culture. He offers to take me to the foot of a sandat tree that is ‘more than 30 meters tall’, adding sandat trees of this height cannot be found in gardens.

We head towards Tampaksiring and its Tirta Empul or Holy Spring Water Temple, famous for its holy water basins. It is the Mecca of Balinese purification. The balmy air of the temple is laden with incense and is soft and soothing. We meet men and women in their ceremonial robes. Always very elegant, the Balinese women are dressed in fine lace outfits, each fixed with a silk belt. They occupy themselves by carving palm leaves with nimble fingers while talking among themselves. The men are wrapped in colorful batik sarongs and wear the traditional udeng headwear. Flowers again feature, as each person wears one behind their ear or as part of their hair arrangement, juxtaposing brilliant colors with their jet black hair.

The temple complex encloses a sumptuous sandat tree. Despite the distance that separates us from the top, we can identify a few small yellow flowers. With a permanent smile on my face, I immerse myself in this unexpected vision. Our enthusiasm raises the curiosity of a man lying there. He offers to climb the tree to pick some flowers. I politely refuse, but he is already climbing, with bare feet and hands, up this 20 meter-tall tree. Fortunately, the lingering moisture from the previous night’s rain shower convinces him to arrest his ascent at a safe height.

It is indeed these majestic tall trees that commonly produce the flower used in perfumery. In Indonesia, flowers are picked from more than 20 meters above the ground. Traditionally, men climb to the top by way of a bamboo ladder (needless to say), in order to firmly shake the flowering branches with a long wooden fork. Yellow flowers begin to fly, twirl, and color the sky before settling on the ground. Then it is the turn of the women to collect the fallen flowers into large baskets, before the contents are weighed and then distilled.

It was a marine named Albert Schwenger who in 1860 performed the first distillation of a ylang ylang flower, in Manila, Philippines. Shortly afterwards, ylang-ylang flowers were processed on a large scale for French perfumers around Indian Ocean in Mayotte and Comoros Islands. Indonesia is no longer the world’s foremost producer of ylang yland essential oil. The local factories in operation tend to be small and serve local customers only.

In perfumery, ylang ylang is often used in floral accords. Halfway between jasmine and tuberose, this flower brings sensuality and exoticism in a perfume. One hundred kilograms of flowers are required to extract two liters of oil.

It is common to find Balinese beauty products that contain ylang ylang. For me, this was an opportunity to forever remember the deep floating but heady ylang ylang scent that I will always associate with my journey in Bali. 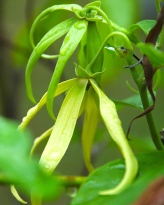 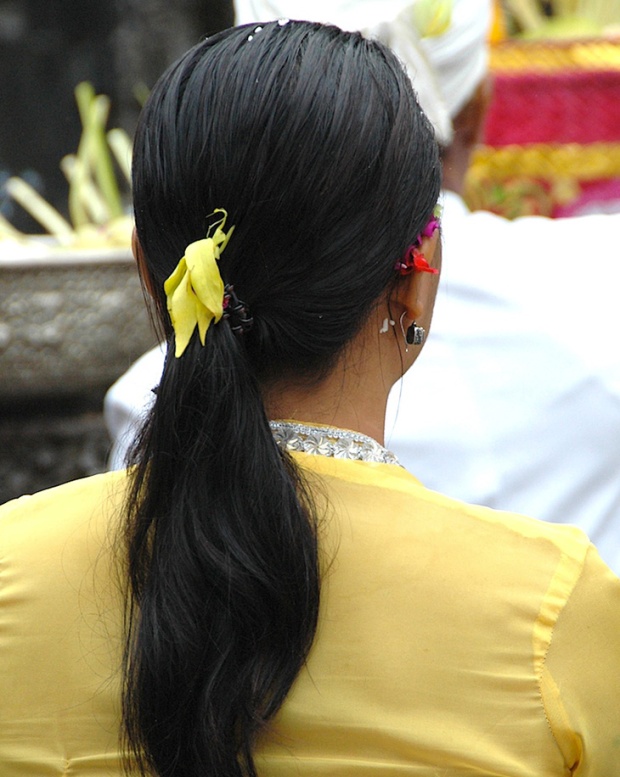 This blog is for all perfume enthusiasts but especially of travel and discovery. Because scent is also a gateway to the people and cultures of the world, I invite you to travel your nose leading the way to discover the world differently.

There was an error retrieving images from Instagram. An attempt will be remade in a few minutes.